Triangle is a small village, half-way between Sowerby Bridge and Ripponden in West Yorkshire. In the Jeffries map of 1772, Triangle is shown as Stanfield Pond. The dotted line is the 'intended' toll road towards Ripponden, although this new road had already been constructed by 1772.

Stansfield Grange (or The Lodge as it was known before 1900) is shown as a black mark at the bottom of Oak Hill and the mill is indicated by star on this map, on the river side of the road. There were three small flax mills in the vicinity at this time.

The road up Oak Hill to Soyland was the main pack-horse trail to Lancashire and was no more than a rough track. 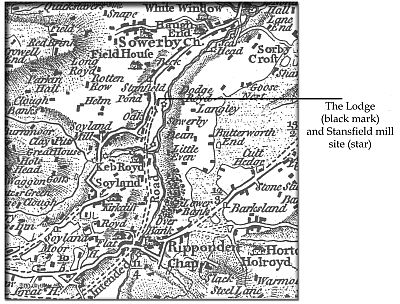 Triangle  takes  its name from the Triangular piece of land between the main road and Oak Hill, opposite The Lodge. The Triangle Inn was built here around 1760 when the new turnpike road was constructed along the bottom of the Ryburn valley. The original name for the locality at the bottom of Oak Hill and around The Lodge was Stansfield Pond, and it is still known locally as 'Pond'. The area was called after the pond in the mill owner's house, which we can assume was The Lodge.

Triangle first appears in documents in 1777 when George Stansfeld, a wealthy land and mill owner, lent money to assist the widening of the road. 'Stile' or 'Style' is the local name for the area on the Sowerby Bridge side of Triangle, past the Hollins Terraces where there was a 'stigel', or stile, and 'stig', a steep path leading up the hill to Field House where the Stansfield family lived.

Stansfield Grange is still shown on this map as 'The Lodge'. The dramatic expansion of Triangle in one hundred years was entirely due to employment created by Stansfield Mill.

The mill complex is shown at the foot of Stansfield Lane. By this time a road and a railway were running along the river valley.

Triangle Inn and other public buildings

The Triangle Inn, first registered as a coaching Inn between 1760 and 1765, was a popular local meeting and drinking place. During the Second World War, when engineers were billeted at nearby Kebroyd Mills, it was so popular that people spilled out from the Inn across the road into the area that used to be the pub car park, blocking the road. 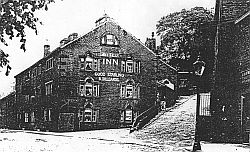 The Mellor family owned the Inn for over one hundred years.

For many years they had a pet gander called Dick as a guard for the Inn. He had free range of the property and its surroundings and would 'see off' any dogs and cats. He was very popular, and when he fell to his death down a well in 1923, local people contributed to a headstone which stood for many years in an adjacent farmyard.

The memorial on the side of the Triangle Inn, commemorating twenty-five local men who died in the First World War, was unveiled by Mr Stansfeld in 1920. At the time of writing, the old Inn is semi-derelict and waiting for a new lease of life.

In the late 19th century there were three textile mills in and around Triangle and the village benefited from many shops and small industries to service the needs of local mill workers. There were as many as twelve shops, three public houses, two churches, a school, a railway station, a constabulary, the cricket club and four fish and chip shops, all close by The Lodge.

In the early 1800s, there was a row of 13 cottages at The Pond opposite The Lodge. 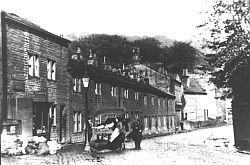 The Co-operative food store was the taller building at the end of the Row, on the opposite side of the main road to The Lodge. 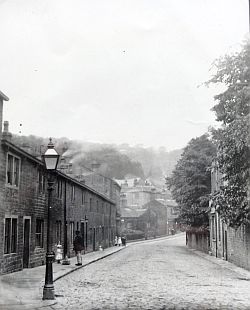 This Inn was half way along Triangle Row. The name plaque can just be seen on the wall above the door to the right of the man in the picture. These cottages were demolished in the early 1900s

The Blue Ball Inn at Stile 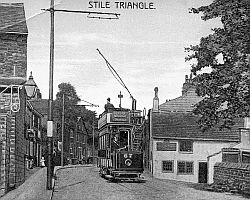 The Blue Ball Inn at Stile was at the end of the tram line from Sowerby Bridge. The Inn closed in 1910 but continued as a tea-room for a few years. Established in 1865 it closed in 1955 and was demolished in the1960s. 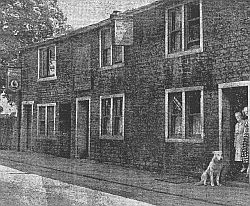 The White Horse, a third inn, was also on the main road at Stile.

Today the one remaining shop is the Triangle Post Office.

A school for young children was built in 1857 and extended in 1899 to accommodate all ages. For adults there were opportunities for further education when The White Bear Inn was converted into a social club and Reading Room in the1860s. Lectures were given here monthly as well as 'Cottage lectures' in private homes.

The Triangle Cricket Club, active to the present day, was founded by members of the Reading Room, and in 1927 the club obtained its own ground and club house at Grassy Bottom.

During exceptionally cold winters, people would skate on the flooded cricket ground. The ground has consistently been well used for athletics and sports, and the cricket club celebrated its centenary in 1962.

The Church of St John the Divine 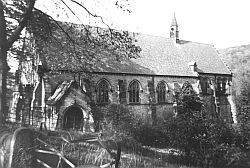 This was built at Thorpe, half a mile from The Lodge in 1880. It amalgamated with St Mary's Cottonstones in 1968 and the building was demolished in 1973.

The Wesleyan Methodists met in a temporary Chapel in the grounds of Dean Cottage at the bottom of Butterworth Lane in 1901. This was known as a 'Tin Tab' (a metal roofed tabernacle). 'Tin Tab can be seen on the far right of the photograph adjacent to Dean Cottage.

'Tin Tab' (far right) in the grounds of Dean Cottage 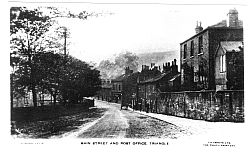 Dean Cottage was used as an annex to the hostel at Stansfield Grange when numbers of young women rose to over 100. In 1924 the Methodists moved to a permanent chapel further up Butterworth Lane. The Chapel closed in 1990 and is now a children's day nursery.

The improved mill provided more work for local people.  William Morris took over many existing properties and built more houses to accommodate his workers at Triangle.

As well as donating the cricket field, William Morris gave Triangle 'slipper' baths and a swimming pool in 1864. This closed in 1878 after the municipal baths opened in Sowerby Bridge.

Stansfeld to Stansfield: The Stansfeld family lived at Field House, up the hill from Triangle, until the mid 1980s. Around 1550, the family adopted the variant spelling of Stansfield. The reason for this is not clear, but English spelling in general was not fully regularised until the 17th century. During the 17th century, the Sowerby Bridge branch of the family reverted to the original Stansfeld spelling which has been retained by descendants of the family. However, the place names have remained as Stansfield.

The original first part of the name - 'Stan'  - could have been a person's name or possibly a variant for ‘stone’. The suffix 'Feld' is seen in Middle and Old English, meaning open or cultivated land.

John Tillotson was born at Haugh End, near Pond in 1630. He later became Archbishop of Canterbury. His father Robert lived at The Breck, Triangle and was well known as a cloth merchant and puritan.

It is possible that Daniel Defoe passed by The Lodge on his 'Tour of Britain' in 1714. On his way from Blackstone Edge to Halifax he wrote about the steep hills and commented that he passed many houses, each with a tenter, and 'on almost every tenter hung a piece of cloth.'

William Wordsworth's aunt married William Rawson who lived at the Mill House at Bullace Trees, half a mile from The Lodge. Wordsworth's sister Dorothy visited her Aunt regularly and wrote about walking up to Norland from Triangle. William visited less frequently but Dorothy told him a tragic story of a local girl who drowned in the Sowerby Bridge canal during a snowstorm. This inspired him to write the poem 'Lucy Gray'.

The Rushbearing Festival can be traced back to the 17th century. It is a celebration to mark the end of harvest, when rushes used to be replaced as flooring in the local churches. After a lapse, the festival was revived in 1977, just as Stansfield Mill closed and the connection between Stansfield Grange and the textile industry ended. 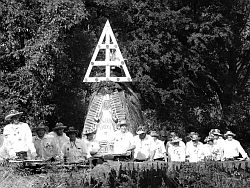 During Rushbearing a highly decorated rushcart carrying a young woman is pulled around the churches and pubs of the area by sixty men dressed in Panama hats, white shirts and clogs. This takes place over a weekend in September. Musicians, mummers and folk dancers accompany the procession.

Having descended Oak Hill, the parade passes Stansfield Grange, continuing down Stansfield Mill Lane to the Cricket Club before continuing to Ripponden.