The 'Triangle Mill Sisters' exhibition, researched and curated by Ruth Beazley, toured Calderdale Libraries in 2014 - 2016. It was awarded the Women's History Network Community prize 2014 and was received  enthusiastically by local people in Calderdale, especially ladies who had previously lived in Stansfield Grange when it was a hostel.

Many women were helped to trace relatives from hostel days and renew friendships. The BBC's 'Family Finders' programme, broadcast in 2016, helped one lady learn about her mother who had lived in the hostel, and discover family members of whom she had no previous knowledge.

The exhibition was sponsored by the Community Foundation for Calderdale. Many requests were made for a follow-up book and grateful acknowledgement is given to Accent Group Ltd. for supporting the publication of the book and for the production of this website.

Some of the Stansfield Grange hostel ladies who came to the Sowerby Bridge 'Triangle Mill Sisters' exhibition in 2014. Photo by Bruce Fitzgerald.

How these records came about - Ruth Beazley

Over the past 20 years, I have watched the remains of industrial mill buildings being converted into living accommodation, 'going up in smoke' or falling into disrepair and being demolished. When I first started my research I was surprised how few oral history records there were recording the voices of mill workers - especially women - who were the 'life blood' of the  mills. I felt strongly about this and as a starting point took images of women mill workers as the theme for my art work between 2007 and 2009.

In 2007 I received a wonderful gift from the late Ted Fenton of Sowerby Bridge; a collection of over 400 photographs of Triangle mill workers. The photographs had been collected at a hostel reunion in the 1970s and most of the photographs were taken by Ted or by the women themselves. Ted took copies of the collected photos and from these created a video 'Golden Days' when he got his first computer some years later. Without Ted's efforts it is likely that the history of the Stansfield Hostel would have been lost forever.

Golden Days can be viewed on YouTube from the links below.

Between 2009 and 20012 I video-interviewed some of the hostel women whose images I had used in my art work. From this material came the social history exhibition 'Triangle Mill Sisters' which started its life in Sowerby Bridge library in 2014. It then toured Calderdale libraries for two years.

The fifty years of hostel life from the 1920s to the 1970s impressed and excited me greatly. Having lived in a student hostel for one hundred women myself, in the 1960s, I recognised the exuberant and joyful experience described by these women, living away from home for the first time.

Digital art image accepted for exhibition by the Royal West of England Academy. 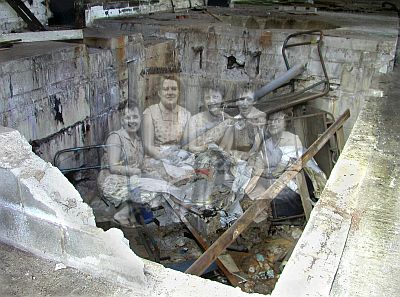 I was also deeply moved by the sense of responsibility they showed for their parents and siblings, especially as they were so young - some of them only 14 years of age. So great was the need at home that the majority of them posted money from their meagre wages every week to help their families. This was such a contrast to the circumstances of the previous owner-occupiers at Stansfield Grange.

The generous supportive 'family-style' management at Illingworth Morris and Co Ltd. also impressed me. It reflected the mutual dependency that the women and the mill business shared. The more commonly held impression I had was of exploitative mill owners whose workers often suffered greatly from unhealthy and dangerous conditions at work and in their homes. This indeed was the case in the earlier industrial period, but in the latter years of the industry's history, working conditions improved and the hostel women were cared for very well.

I am delighted that my art work has led to the exhibition, a book and this web site, and has redressed an imbalance in historical records by recording the experiences of some women mill workers.The vibrant memories recalled by the hostel women continue to provide me with inspiration for ongoing art work.