Stansfield Grange has witnessed massive changes in its history from the beginning of industrial manufacturing to the demise of the textile industry. During its colourful history over three hundred and fifty years, it has been adapted and improved to provide comfortable homes for its occupants. These have ranged from textile entrepreneurs, nouveau-riche mill owners, penniless mill workers and private householders. 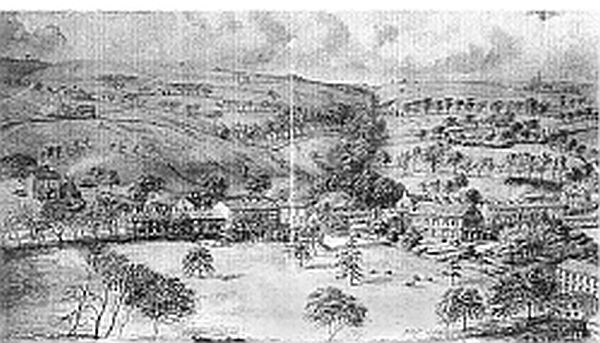 This drawing of 1884 shows Stansfield Mill bottom right and Stansfield Lodge appears above it as one building with no valley roof.

Until 1894, The Grange was marked on maps as Lodge House. The property became known as Stansfield Grange after William Morris took over around the turn of the 20th century, although it was still named 'The Lodge' on OS maps into the1960s. A major extension was built in 1943 to provide seventeen new bedrooms and bathrooms to all three floors, a drying room and a recreation room on the ground floor. In 1950, a sun room/lounge was added to the original building.

William Morris at The Lodge

Garden at The lodge taken late 1940s, before the sun room extension was built. 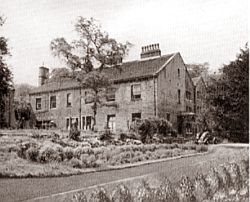 In 1861, William was living at The Lodge with his wife Barbara (age 40), his son Alfred (age 9) and his daughters Alice and Elizabeth (age 6). Also in the household were four servants Agnes Wilson, Mary Brock, Ann Sykes and Ann Dearnaley.

For the next fifty years The Lodge was the Morris' family home. There is no mention of daughter Elizabeth after 1861. It is possible that she died young. William died at the Lodge in 1882 aged 75, and Thomas and Alfred carried on the family business.

William was Chairman of the Halifax Chamber of Commerce and the Halifax Commercial Banking Company in 1882 and there is a window in his memory in Sowerby Church.

The 1891 census shows Thomas Morris age 42 as head of the household living with his mother, Barbara , age 70, his sister Emily, age 44, and his brother Alfred, age 39.  It can be assumed that William's wife Barbara died in her 70s before the next census in 1901. Thomas had a daughter Alice Barbara who married Arthur Armitage in 1877. In 1891 two of Thomas' nieces were also living at The Lodge, Elize (born 1879) and Maud (born 1881) whom we can assume were Alice's children.

Thomas was Deputy Lieutenant and a Justice of the Peace for West Riding. He was also in the second West Yorkshire (Prince of Wales's Own) Yeoman cavalry where he rose to the rank of Colonel.

After Illingworth Morris took over from William Morris in the 1920s, Stansfield Grange was turned into a hostel for 100 female mill workers and the building was adapted to meet their needs.

This photograph was likely to have been taken between 1881 and 1900, after William Morris had died. The play equipment in the garden was probably for Thomas' two nieces Elize and Maud. This photo was used on the back of the1950s hostel brochure. 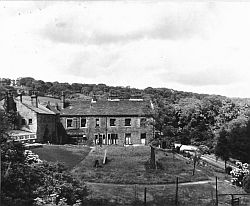 By 1911 Alfred Morris was the head of the household and living at The Lodge with his wife Adeline and their daughter Laura (born 1900). Also in the household were Elize and Maud Armitage, aged 12 and 10, their German Governess Frances Picket, a cook Sarah Pullen, a housemaid Eliza Sandland, an under-housemaid, and Jessie Sandland a "butcher domestic maid".

In 1921 there are records of Thomas Morris  purchasing a lot of property in Triangle. However the textile trade was in recession, the business was in difficulty and the family business was integrated into the Illingworth Morris Group. 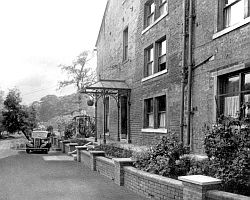 The Morris family left Stansfield Grange in 1921 and the local recruitment problem for Stansfield Mill was addressed by Illingworth Morris, who converted The Grange into a hostel for one hundred women. This arrangement proved to be very beneficial for the company and provided a 'Home from Home' for over a thousand women mill workers over the following fifty years.

The mill's managers were good to the women and made a number of improvements, including extensions to the building to meet their accommodation needs. 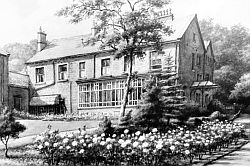 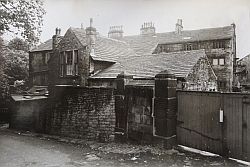 After the mill closure. Accent Group

The Mill closed in 1970, and some of the women were integrated into the workforce at Corporation Mill in Sowerby Bridge. The hostel was kept open for many months to help the women find alternative work and accommodation.

When it eventually closed in 1972, the future use of Stansfield Grange was hotly debated. Proposals were put forward for its conversion into a residential educational study centre, a children's respite centre, an environmental study centre, a teachers' resource centre and a community centre for older people. Ultimately, despite intense interest from Ryburn School to annex it for educational purposes, it was sold by Illingworth Morris to Accent Group Ltd. (who were then Bradford and Northern Housing Association), and converted into residential accommodation in 1977.