Working hours varied but in the mid-1950s, the young women were woken at 6.30 am and were expected to be in the mill by 7.30. For those women who worked at Corporation Mill in Sowerby Bridge, Morris' put on buses to take them to and from work. 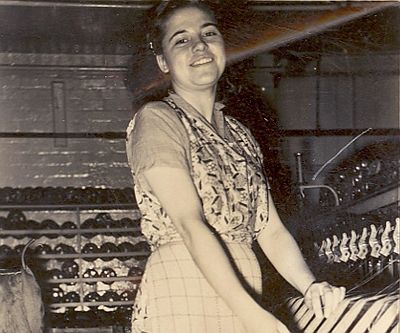 In Corporation Mill, a tea trolley came round at 9 am and the Triangle girls returned to The Grange for breakfast. Everybody had an hour for lunch and all meals were provided. When numbers in the hostel exceeded one hundred, the Triangle mill girls would leave work at 5.15 pm so they could have their tea before the Sowerby Bridge buses returned.

The women worked Monday to Friday and Saturday mornings, and sometimes were expected to do overtime at the weekends for which they were given 'time in lieu'. 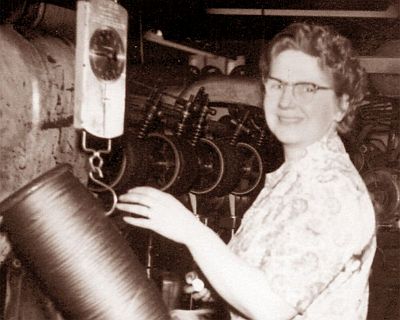 In the mills there was a variety of jobs processing the woollen thread: combing, drawing, spinning, twisting, winding, warping, oiling and doffing. The work was dirty and sometimes dangerous. It was also very noisy and the women learned to lip read so they could communicate with each other.

'I sent me mam 10 shillings a week for ten years.' (1940s). Most of the women, some as young as fourteen years of age, felt a strong sense of responsibility for their families and most would send a postal order home every week.

The women had hostel bed and board costs deducted from their wages. In the 1930s, this left them four shillings and nine pence a week (a mere £11 today's equivalent). By 1970 a woman's weekly net income was £9 (£70 equivalent today).

The young women had to be very careful with their earnings, saving for travel home and holidays. The rest was spent on clothes, dancing, the electric cinema and in milk bars in Sowerby Bridge. They also saved for holidays. Butlins at Filey was a favourite summer venue and for treats for their families. 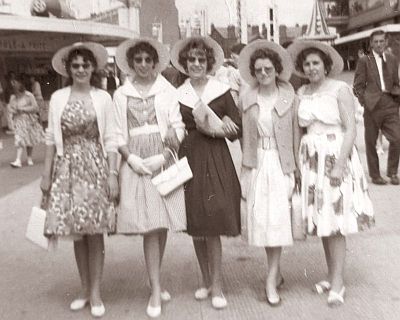 Preparation untangles, straightens cleans and dries the wool into slivers

Gilling draws out the slivers and blends them together

Combtop finishing blends the tops together ready for drawing

Spinning twists and spins the roving to exact size

Twisting strengthens the yarn and holds the fibres together

Winding organises the yarn onto cones

Warping and pirn-winding. A pirn is created for loom shuttles ready for weaving.

The pirns were then sent to Bradford for weaving

Mending addresses any faults by hand with a needle and thread

Tailoring sews the cloth into clothes

'They would move us around a bit....they were very flexible' (1950s) 'I wouldn't call it hard. [But],... it was noisy and not always safe'.(1950s) The women worked Monday to Friday and Saturday mornings, and sometimes were expected to do overtime at the weekends for which they were given 'time in lieu'.