Triangle village is half way between Sowerby Bridge and Ripponden in West Yorkshire on the A58.

Stansfield Grange was known as 'The Lodge, Triangle' until 1900. It has had centuries of association with the worsted woollen textile industry. Originally built as a mill owner's home it also served as a hostel for one hundred women mill workers for the final fifty years of textile production. It is now converted into thirteen private apartments. 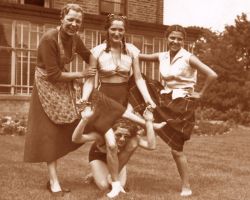 The hostel years (1920s - 1970s) were the topic of the popular, award winning 'Triangle Mill Sisters', exhibition which toured Calderdale Libraries 2014 - 1016 and an associated book 'Stansfield Grange. Home of the Triangle Mill Sisters' was first published in 2016. The book has now sold out but if you are interested in obtaining a copy please contact Ruth Beazley.

Stansfield Mill at Triangle was owned by William Morris and Sons in the late 19th century. This company was amalgamated into the Illingworth Morris Group in 1921. When Stansfield Mill closed, in 1977, the Grange was sold to Accent Group Ltd., (previously Bradford and Northern Housing Association).